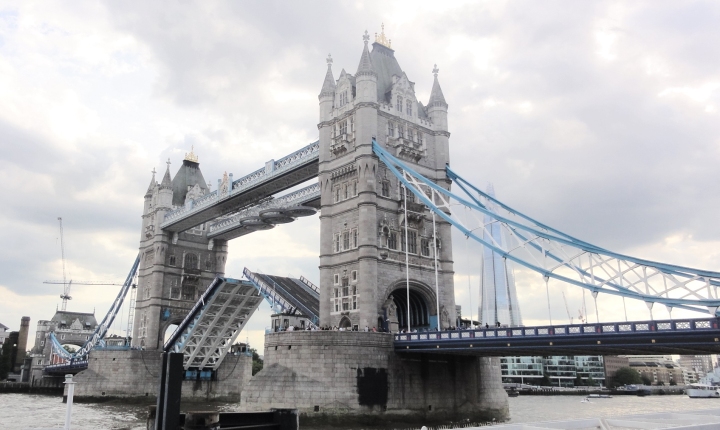 This picture shows the two giant roadways of the Tower Bridge in London converging back, after lifting to make way for a passing boat. The picture was taken in the summer of 2012, and you can also see the 2012 Summer Olympic rings on the roof that would retract before the roadways lifted, and came back to place after the roadways converged.

Also, the Shard building can be seen in the background, the construction of which was, at that time, close to being completed.

I love bridges, in all their different shapes and sizes, but the Tower Bridge is special and looks even more stunning when its lit up in the night. The roadways of the Bridge lift based on a pre-determined schedule which is available on its website. If you get a chance, do pay the  Bridge a visit when its roadways are lifting and converging back.

Starting Second Grade! She is excited and I’m just a little sad as she is growing up too fast for me!
Westcave Preserve and Grotto is an adventurous day out in Texas Hill Country! Best time to visit - mid May when the wildflowers are in full bloom. #texas_hillcountry #westcaveoutdoordiscoverycenter #austintx
Still having a hard time wrapping my head around this…. We are living in the Handmaid’s Tale.
After a long hiatus, I’m back to writing travel tales. North Cascades National Park may get overlooked because of all the natural beauty of the PNW but it’s no less gorgeous! (Link in bio).
So grateful for my mom(s), on Mother’s Day and always! @kothari.anuradha12 @neetalatawa @prabha.jain.75839
‘Tis the day :)
One of the most fun things I have done in a while. When you visit us, we are definitely going paddle boarding in Lady Bird Lake. And this includes you @priakothari :)
Me: Siena, I get excited about wildflowers… and waterfalls and bridges… and benches too!
I wanted to take Siena to Franklin Falls, a classic PNW beginner hike, for a long time, and finally did it after work today taking advantage of the long long summer days :) #pnwonderland
Tulips!!
Garfield Ledges with my buddy.
Join 1,187 other followers