Even with little planning and research, Acadia National Park in Maine, U.S. left us enthralled. A trip to Acadia National Park would require some amount of driving to get there and depending on where are you are starting from, this could be between a few hours to a very long drive. Thus parents with young kids might wonder, “It it worth it?” And take my word for it.. the answer is a big resounding yes. Even with a toddler who was terribly car sick in the drive from New York to Portland, Maine, the beauty of Acadia was so worth the trouble to get there.

Acadia National Park is vast and can be a little overwhelming. I previously wrote about Cadillac Mountain. Here are some other stops in the National Park that can help you plan a trip. Hopefully the pictures can convey the beauty where the words may have failed. 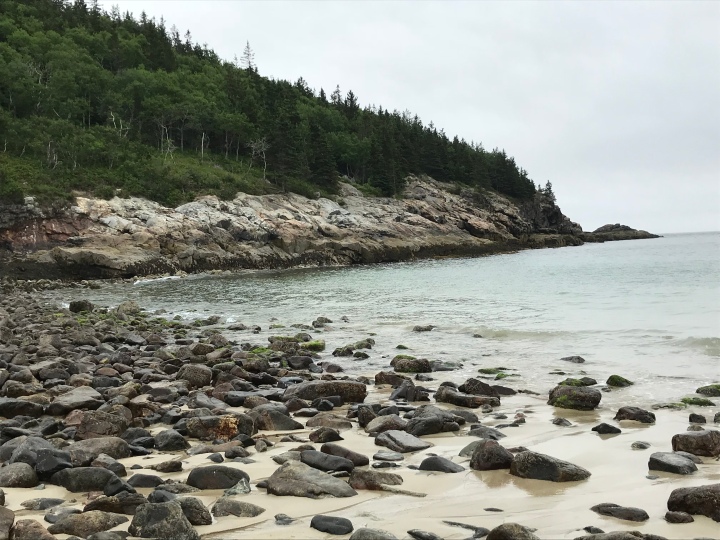 While its name is clearly unpretentious and a bit lacking in flair, the Sand Beach is nothing short of lovely. I have seen beaches with softer-white-powder-sand and beaches with more-turquoise-waters but I had never seen a beach in a cove with so much greenery surrounding it. Bordering the beach on all three sides are the ubiquitous forests of birch and Pine. The Sand Beach is not too far from the entrance to Acadia National Park and since we made our way there at 6:30 am on a Monday morning, we were rewarded with having the entire cove to ourselves. The beauty of the beach is accentuated with rocks and pebble formations, and Siena had a great time hopping on the pebbles and splashing in the gentle waves. If anyone is asking me, I would gladly rename this beach Emerald Cove. 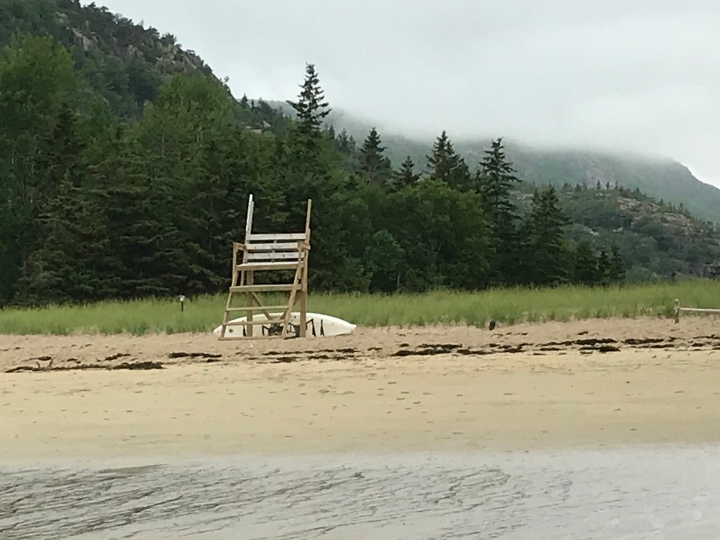 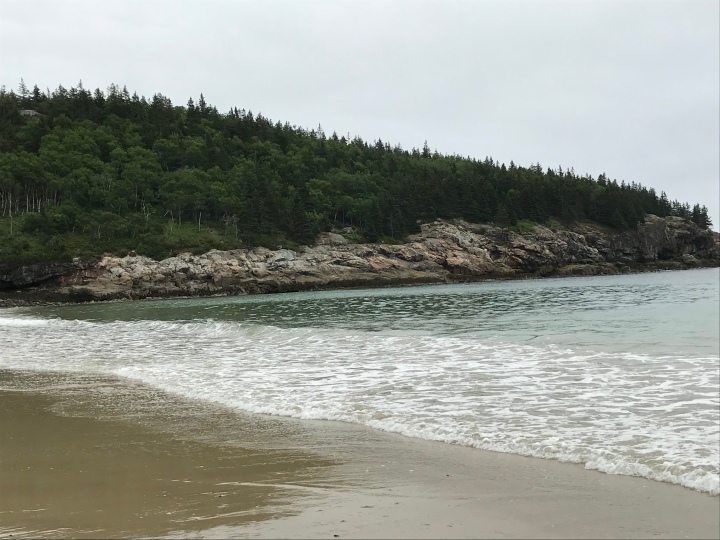 This road which runs against the rocky coast of a large portion of Acadia has many lookout points to take in the waves crashing the rocky outposts. A lot of these lookout points are also the starting point of hikes and trails which are very popular with families. 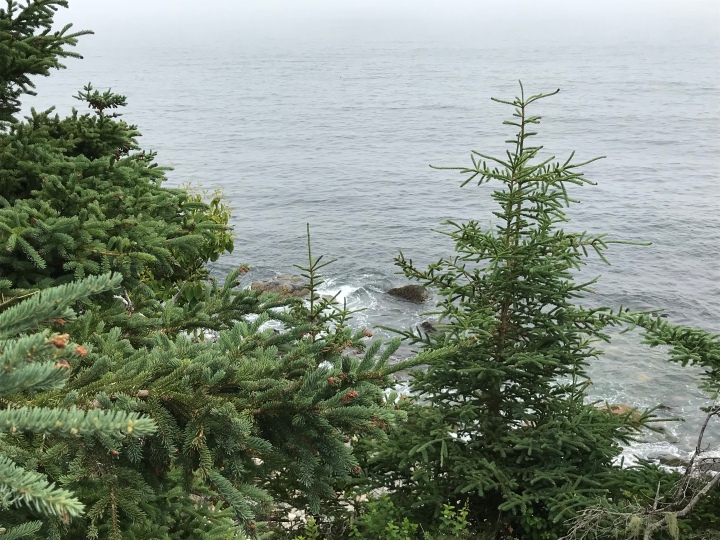 This lake surrounded by mountains is known for its very clear water. A lush green and wooded walking trail meanders around the whole perimeter of the lake. We were easily able to walk sections of this trail with our toddler. We stopped at one point and dipped our toes in the calm waters, and saw schools of fish swimming around our feet.

Before walking the Jordan Pond path, we stopped at the Jordan Pond House restaurant for lunch. Their specialty is a puffy soft pastry called pop-overs.  Even if you do not have time for a full meal, do try to snag a table and enjoy the pop-overs with a view of the lovely pond.

This iconic lighthouse perched on a cliff is often the image that appears when you google Acadia National Park. This was our last stop in Acadia before driving back to Portland and the lighthouse did not disappoint.  After walking down a mud path and climbing over rocks, we were rewarded with expansive views of the Atlantic and the lighthouse. However, as much as I tried to go into a corner and take a picture, I could not get a good picture of the lighthouse and the cliff. A good picture would most certainly have to taken from a boat. Below you would only see my sad attempt at capturing the lighthouse. 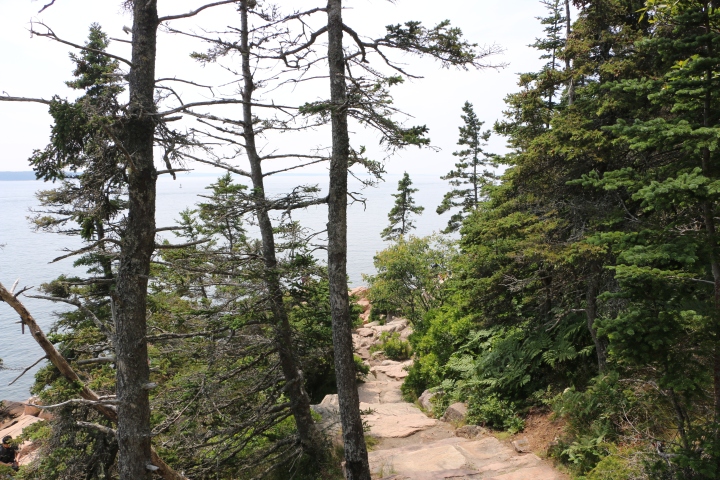 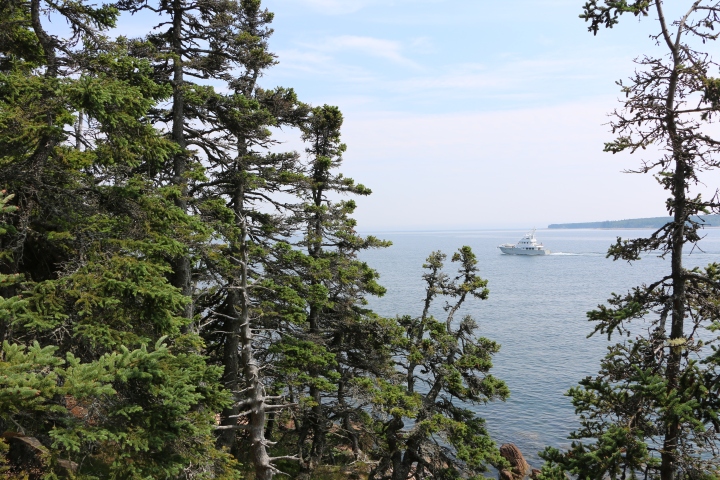 p.s. – Now that we have moved to the Seattle area, Acadia National Park and Maine are an entire breadth of a continent away from us. Hopefully, we would get a chance to visit this beautiful, rocky, rugged place again!

One thought on “More beauty in Acadia National Park, Maine”

Starting Second Grade! She is excited and I’m just a little sad as she is growing up too fast for me!
Westcave Preserve and Grotto is an adventurous day out in Texas Hill Country! Best time to visit - mid May when the wildflowers are in full bloom. #texas_hillcountry #westcaveoutdoordiscoverycenter #austintx
Still having a hard time wrapping my head around this…. We are living in the Handmaid’s Tale.
After a long hiatus, I’m back to writing travel tales. North Cascades National Park may get overlooked because of all the natural beauty of the PNW but it’s no less gorgeous! (Link in bio).
So grateful for my mom(s), on Mother’s Day and always! @kothari.anuradha12 @neetalatawa @prabha.jain.75839
‘Tis the day :)
One of the most fun things I have done in a while. When you visit us, we are definitely going paddle boarding in Lady Bird Lake. And this includes you @priakothari :)
Me: Siena, I get excited about wildflowers… and waterfalls and bridges… and benches too!
I wanted to take Siena to Franklin Falls, a classic PNW beginner hike, for a long time, and finally did it after work today taking advantage of the long long summer days :) #pnwonderland
Tulips!!
Garfield Ledges with my buddy.
Join 1,187 other followers