The Amalfi Coast drive – with gray hues instead of blue.

On a regular Italian summer day, this should have been a stunning blue sea!

“Driving will not be easy in this rain.”

“Why don’t we take the SITA bus?” I say, referring to the big blue public transport buses easily identifiable on the road.

This is the bizarre conversation that Sach and I had, on repeat for about 5 times, before we drove forth into the twists and turns of the Amalfi Coast. It did not help that our day had started at 4 am when we checked out of our hotel in Rome and we had already drove for three hours to get to Sorrento, a city near Naples which is the de-facto beginning of the celebrated Amalfi Coast drive.

Pick up any guide-book for Italy and tell me if you are not seduced by the jaw dropping pictures of pretty towns along the Amalfi Coast perched over cliffs overlooking the vast expanse of shimmering blue Mediterranean Sea. 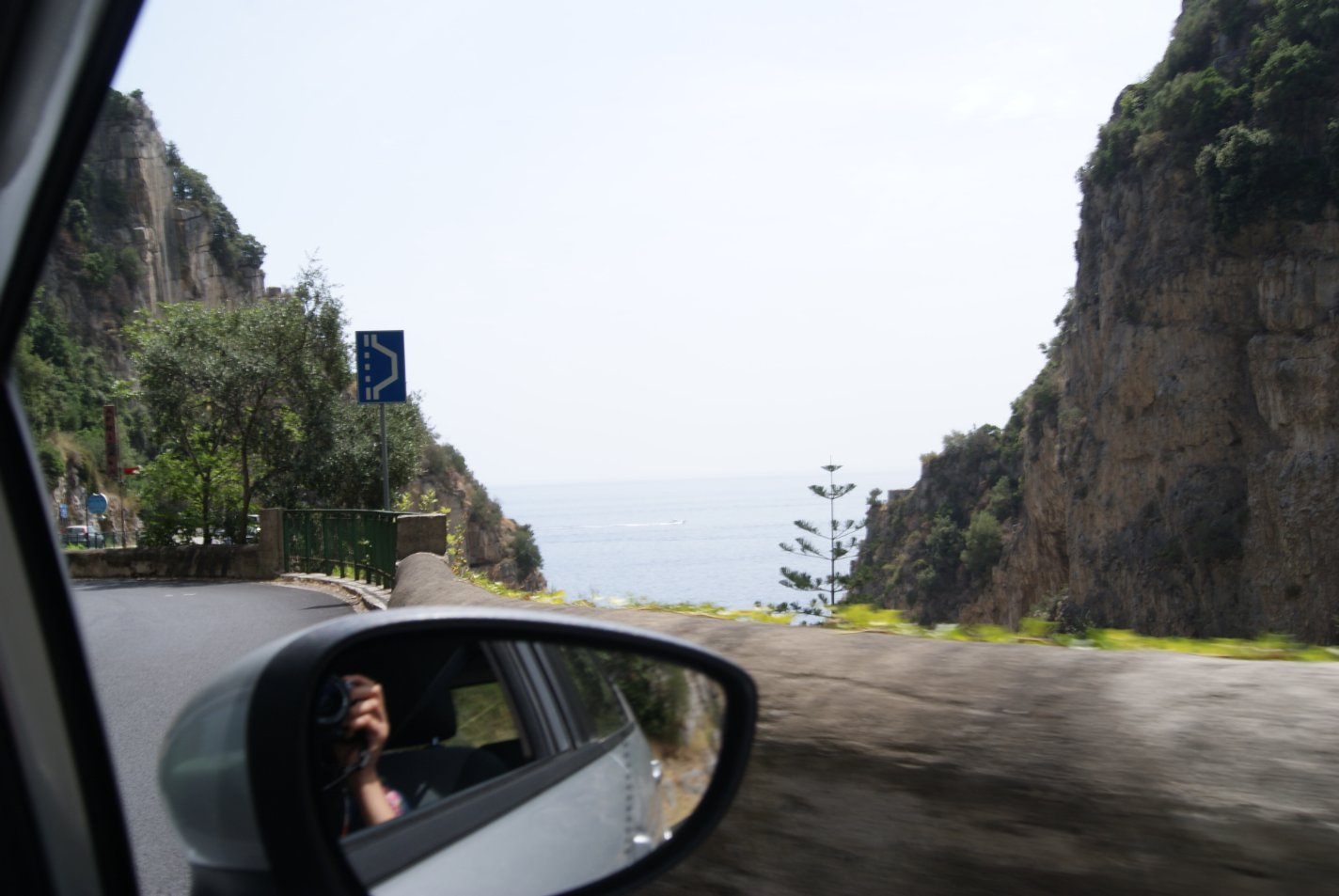 Driving down the Amalfi Coast

But the shimmery azure colors of the Mediterranean need one prerequisite – a sun shining overhead. As it happened, during the day we visited the Amalfi Coast, that too in mid-August, the sky was completely overcast with intermittent showers. And thus instead of blue colors, we drove alongside a sea which was pale blue bordering on grey. This was the case during the entire drive from Sorrento to Ravello.

I had been planning this trip for almost 5 months and in these five months I had almost memorized the Amalfi coast section of the Frommer’s Italy travel guide. And thus I knew exactly what I wanted to see there – the Villa Cimbrone in Ravello.

All along the drive to Ravello as we passed the towns of Amalfi and the celebrated Positano, I was amazed at how the narrow 2 lane road was easily accommodating the blue SITA buses, cars and motor cycles with space to spare for vehicles to be parked on the side.

Once we reached Ravello, we could not find any Parking signs for about half an hour and then finally parked our Hertz rental where we saw some other vehicles parked. After this bit of confusion, finding Villa Cimbrone was easy. Seriously, the village of Ravello, where the Mediterranean plays hide and seek from behind scented lemon groves, is what an Italian dream vacation is made of. After having lunch at a cafe in cobbled stoned piazza devoid of any traffic, and stopping at a pretty souvenir shop selling all manner of lemon themed curios (did I mention that Amalfi Coast is the home of Lemoncello, a lemon liquor that has to be tasted to be believed?), we began the small hike to Villa Cimbrone.

Preponderance of the lemon motif in the Amalfi Coast souvenir shops

After stopping many a time to take in the views and passing lemon groves (yes, lemon groves… where else will you find lemon groves?), we finally ascended all the steps to the Villa. The Villa dates back to the 11th century and its charming cloisters and courtyards are reminiscent of the Venetian and  Gothic architectural style and are lush with plants and flower beds. Once in the Villa, you are immediately drawn to is its belvedere called the Terrazzo dell’lnfinito or the Terrace of Infinity. As the name suggests, the Terrace of Infinity really puts you front and center in the Mediterranean. The terrace is surrounded with really run down and broken marble statues which at least look good from a distance.

The cloisters of Villa Cimbrone 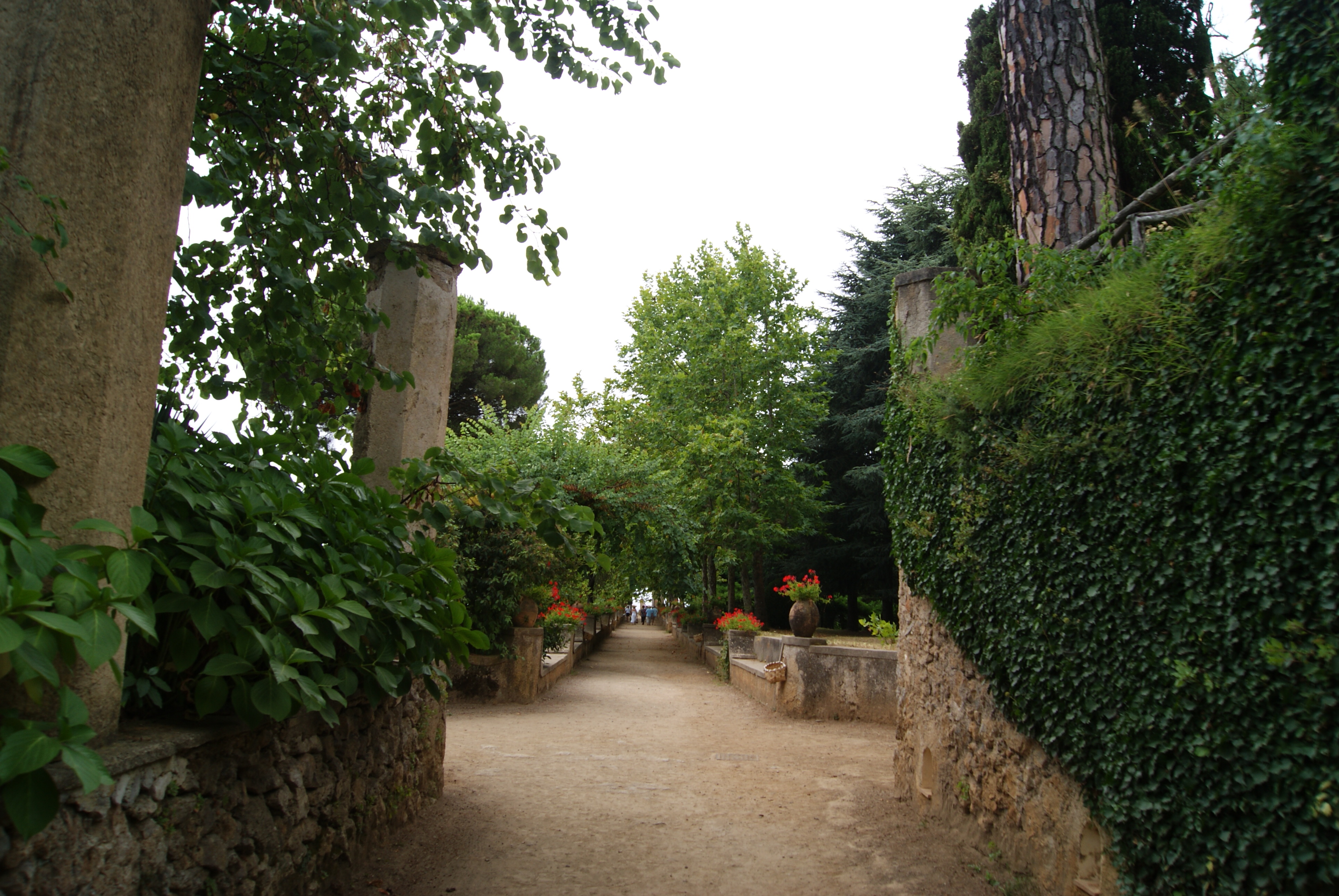 wThe gardens leading to the Terrace of Infinity 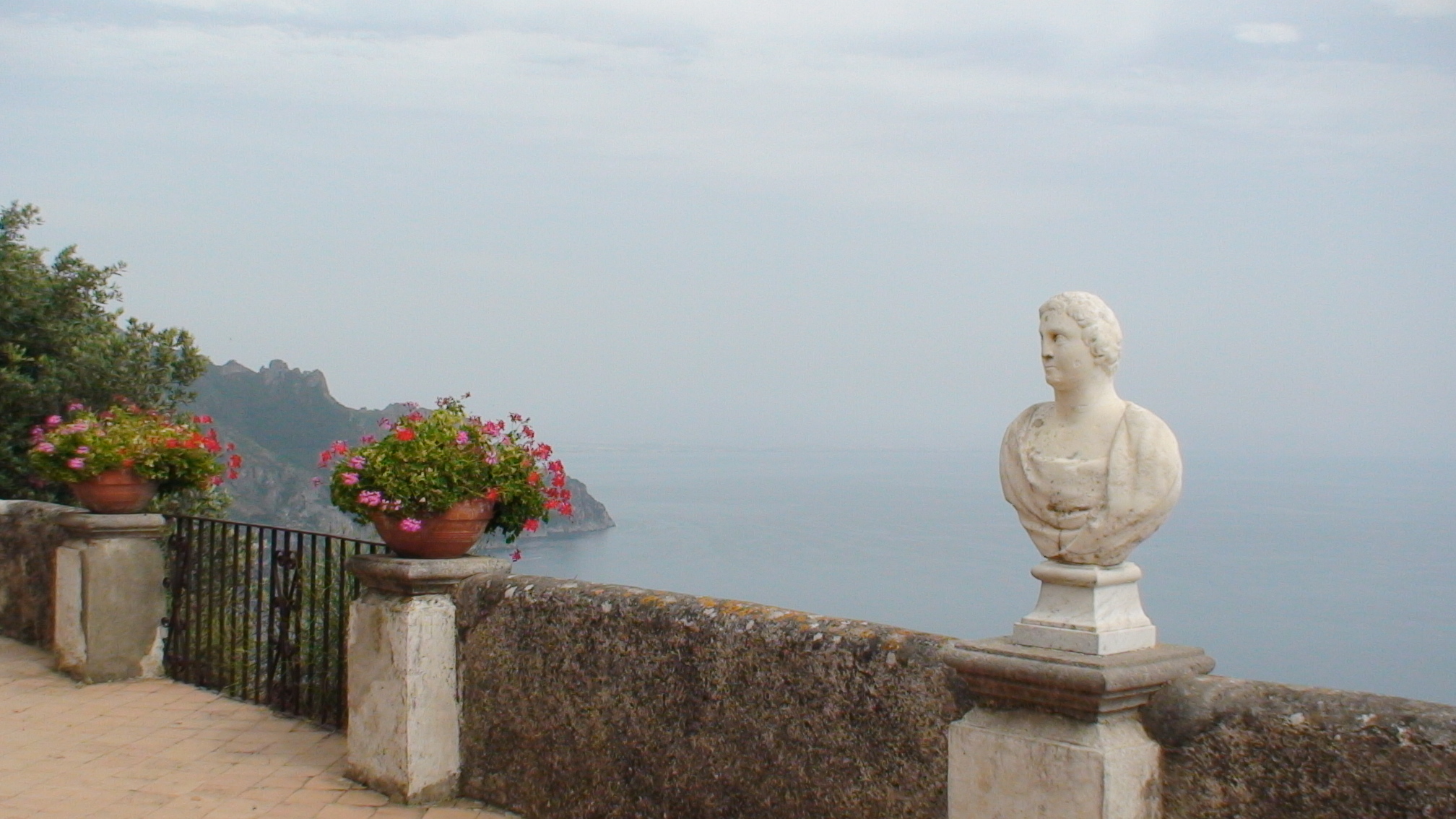 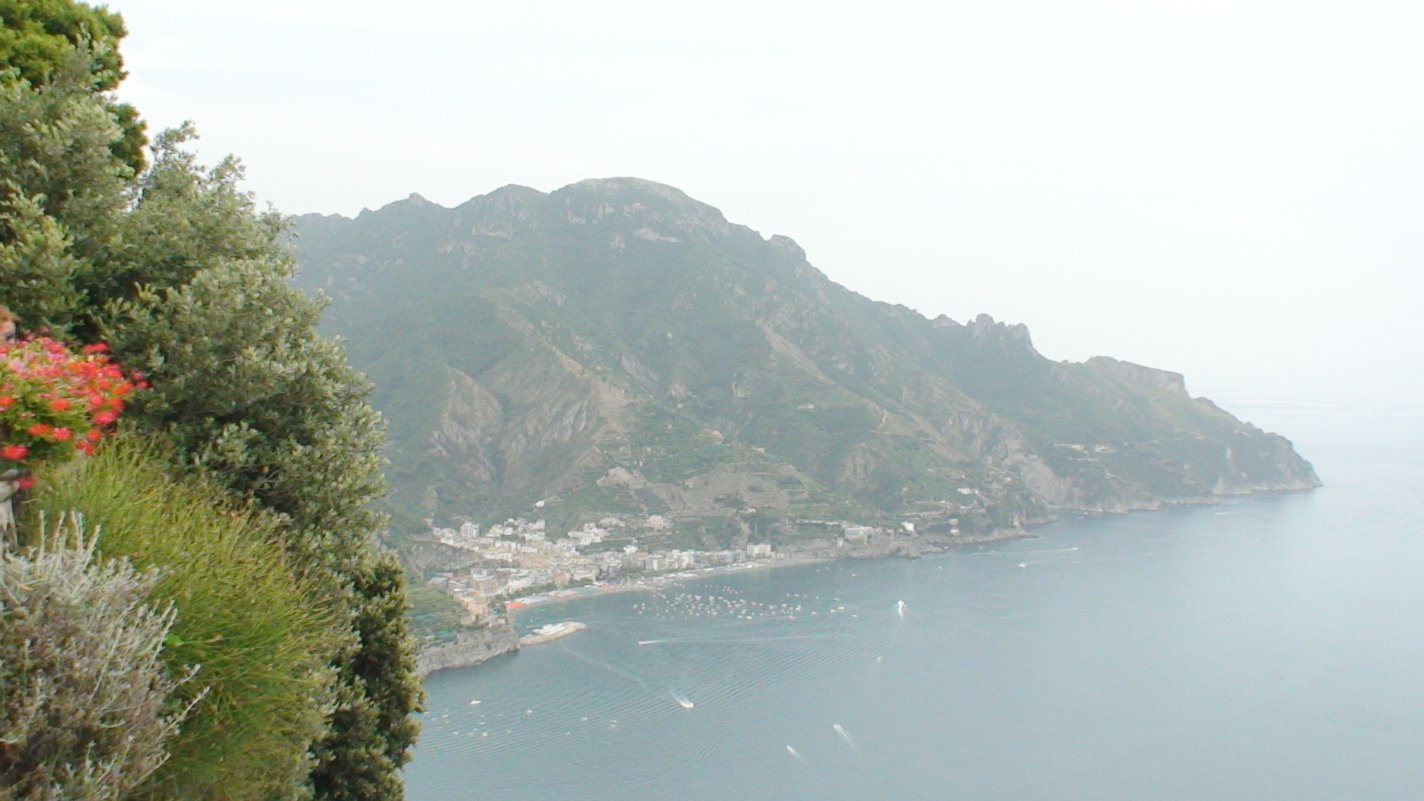 The Sea as far as you can see! 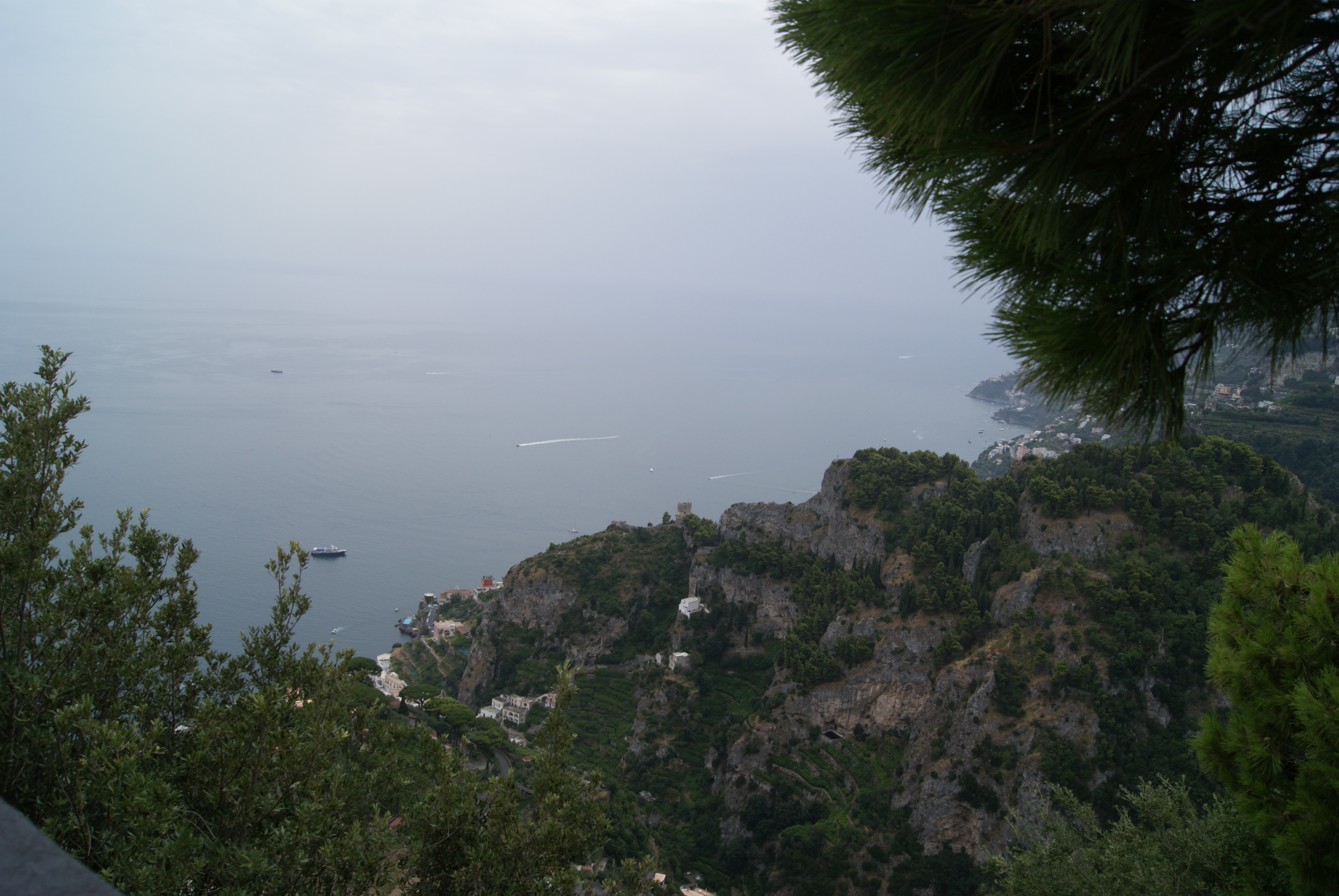 Would you believe that this gray expanse is the Mediterranean?

We spent a few leisurely hours in the Terrace of Infinity and the pretty gardens of the Villa, admiring the sea from all vantage points, even though its hues were gray instead of blue, and then almost reluctantly started the drive back to Sorrento. The skies had cleared a little bit, and we stopped at Positano to admire its postcard-worthy perfection.

The drive back to Sorrento

And thus our cloudy-with a chance of dissapointment-day on the Amalfi Coast came to an end. When you plan your trip – pray for a sunny day (or not – it will still be a memorable experience!).

If looking for a place to stay on the Amalfi Coast, you cannot go wrong with Best Western – La Solara, a nifty and efficient hotel, with jaw-dropping views of the Mediterranean, and a frequent shuttle to the city center.